Icono ayuda Help
In collaboration with Fly over the highest peak in Spain and drink in the green landscapes of northern Tenerife on this unforgettable paragliding experience over Mount Teide. 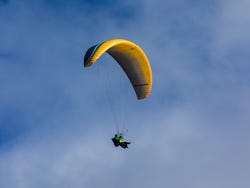 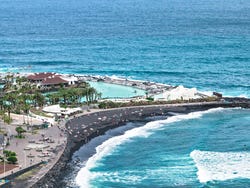 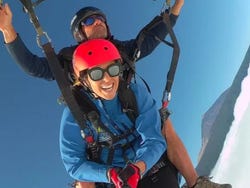 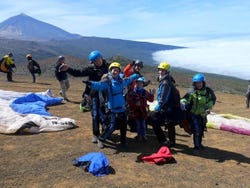 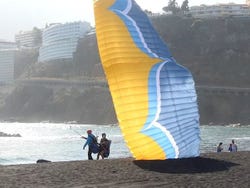 The tour meets at the chosen time at Avenida Familia de Betancourt and Molina in Puerto de la Cruz, in the north of Tenerife. Here we'll climb aboard the minibus that will take us to the Teide National Park for a paragliding experience you'll never forget.

We'll drive uphill, reaching 2200 metres in height, then disembark and begin with the preparations for the activity. The experience takes place in a two-seater paraglider, where one of the places will be occupied by you and the other by a professional pilot, who will be in charge of directing the paraglider. You only have to worry about enjoying the views!

The flight, lasting between 30 and 40 minutes, will allow you to soar through the skies of northern Tenerife and admire the landscapes of the island from a unique perspective. Feel like a bird as we round the highest peak in Spain, fly over the La Orotava valley and marvel at the famous sea of ​​clouds that forms at these altitudes.

Finally, we will fly over the Puerto de la Cruz area, and from up high see its beautiful black sand beaches and the famous Lago Martiánez, the work of the famous Lanzarote architect César Manrique.

We will land at the Martiánez beach and, after an hour and a half that will live long in the memory, end the activity at the starting point.

All of our providers comply with local legislation and applicable health recommendations to avoid the spread of Covid-19. Show more

A safe distance of one metre between clients will be maintained whenever possible.

The use of masks is obligatory. The client must bring their own mask.

Alcohol gel will be available before, during, and after the service.

All those running the service (guide, driver etc...) will wear a mask throughout its duration.

The activity takes place with an escort that speaks in english and spanish.

Transport by car or minibus

Paragliding flight of 30 to 40 minutes

Equipment necessary to carry out the activity

You can book up until 48 hours before the activity as long as there are still places. Book now to guarantee your spot.

Electronic. Show the voucher on your phone.

All services published on Civitatis are carried out in accordance with our Sustainability Code. Specifically, this activity applies the following practices: Show more

No printing of documentation required.

If you have any other questions please contact us.

US$ 169.50
Free cancellation up to 48 hours before the service starts
Book

Free! Free cancellation up to 48 hours before the activity starts. If you cancel under this time or do not show up, you will not be refunded.

These are genuine reviews written by our customers.

I travelled with my partner
10

An incredible experience despite the fact that there were many clouds that prevented us from seeing the landscape from the beginning. Without a doubt I will repeat as soon as the opportunity presents itself again! Opinion translated. Show original.

I travelled by myself
Show all the reviews
like

9.10 / 10 56 reviews
Swimming among sea turtles is an unforgettable experience. Try it yourself on our kayak and snorkel experience in Los Cristianos in Tenerife.
US$ 54.40
Book
like

9.90 / 10 648 reviews
On this night tour of the Teide National Park, you'll hike through magnificent mountainous landscapes under a starry night sky.
US$ 21.70
Book
like

9.60 / 10 112 reviews
Glide along the Atlantic Ocean just off Costa Adeje on board a modern and comfortable yacht and enjoy a 3-hour dolphin and whale cruise.
US$ 66.50
Book